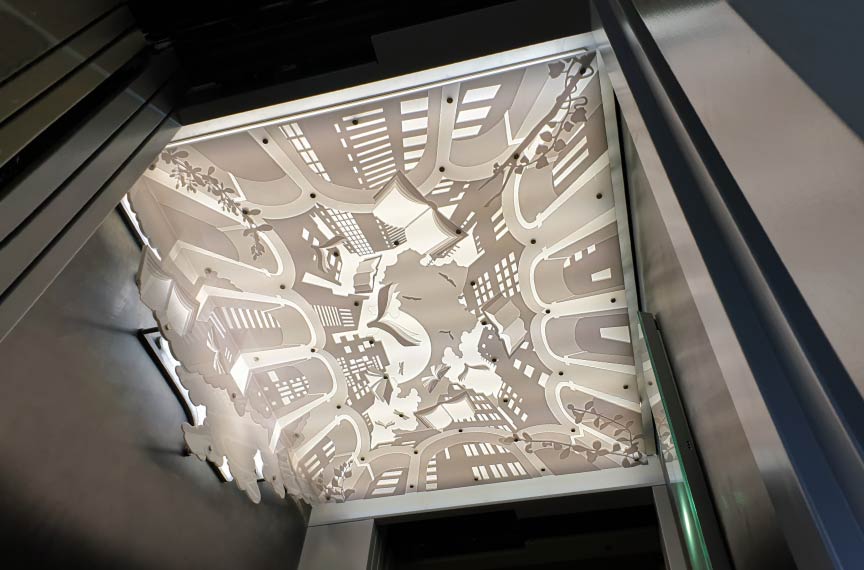 A ceiling design for an elevator in a 1920s art-deco-style private house designated for preservation, communicates with the design style of the house and with its historical story. The house was designed by the famous architect, Joseph Berlin, for one of the most important literary editors of the period and housed prominent figures from the Jewish literary world.

An elevator is not a simple space. A narrow space that generates a startling fall movement, sweeping us to a feeling of claustrophobia and a lack of private space. In order to distract the rider of the elevator from these characteristics, we aimed at putting the user through a gradual process of shifting their gaze upwards, towards the art piece. We accomplished this by a small addition that extends from the ceiling of the elevator to the wall, at the rider’s eye level, which opens up to a window flooded with the ceiling light and behind it, a rich surreal landscape filled with details.

The work included collaboration with the staff of Orly Avron Alkabes Lighting Design Studio for adjusting the lighting tone. For electricity wiring and adjustments of the sensor to turn the light on and off, we collaborated with Schindler Elevator Corporation, and of course for the “fine tuning” of the project we worked closely with the owner, who gave us the feeling of full confidence in us. It was exciting and satisfying for us to execute a pre-planned piece and to integrate it into the overall style of the space, which all corners and passages in it were awarded dedicated handling, alongside the legends of design and the highest art caliber.

All of the electrical components are UL compliant Custom made

We are happy to see you are interested in our product

If you don't see a message in your mail inbox, please check inside the "Promotions" tab

We are glad to see you took interest in our product. Please fill the following form and we will get back to you soon with the details.

Thank you for your inquiry

We will get back to you soon

Thank you very much!!!

You have successfully registered for our newsletter